Who Framed Roger Rabbit is a 1988 American live-action/animated fantasy film directed by Robert Zemeckis, produced by Frank Marshall and Robert Watts, and written by Jeffrey Price and Peter S. Seaman. The film is based on Gary K. Wolf's 1981 novel Who Censored Roger Rabbit? The film stars Bob Hoskins, Christopher Lloyd, Charles Fleischer, Stubby Kaye, and Joanna Cassidy. Combining live-action and animation, the film is set in Hollywood during the late 1940s, where animated characters and people co-exist. The story follows Eddie Valiant, a private detective who must exonerate "Toon" Roger Rabbit, who is accused of murdering a wealthy businessman.

Walt Disney Pictures purchased the film rights for Who Framed Roger Rabbit's story in 1981. Jeffrey Price and Peter S. Seaman wrote two drafts of the script before Disney brought in executive producer Steven Spielberg, and his production company, Amblin Entertainment. Zemeckis was brought on to direct the film, and Canadian animator Richard Williams was hired to supervise the animation sequences. Production was moved from Los Angeles to Elstree Studios in England to accommodate Williams and his group of animators. While filming, the production budget began to rapidly expand and the shooting schedule ran longer than expected.

Disney released the film through its Touchstone Pictures division on June 22, 1988, to critical and commercial success, becoming a blockbuster. The film brought a renewed interest in the Golden Age of American animation, spearheading modern American animation and the Disney Renaissance.

In 2016, the film was selected for preservation in the United States National Film Registry by the Library of Congress as being "culturally, historically, or aesthetically significant".

In 1947 Los Angeles, "toons" act in theatrical cartoon shorts as with live-action films; they regularly interact with real people and animals and reside in Toontown. Private detective Eddie Valiant and his brother, Teddy, once worked closely with the toons on several famous cases, but after Teddy was killed by a toon, Eddie lapsed into alcoholism and vowed never to work for toons again.

R.K. Maroon, head of Maroon Cartoon Studios, is concerned about the recent poor performances of one of his biggest stars, Roger Rabbit. Maroon hires Valiant to investigate rumors about Roger's voluptuous toon wife Jessica being romantically involved with businessman and gadget inventor, Marvin Acme, owner of both Acme Corporation and Toontown. After watching Jessica perform at the underground Ink and Paint Club, Valiant secretly photographs her and Acme playing patty-cake in her dressing room, which he shows to Roger. Maroon suggests to Roger that he should leave Jessica, but a drunken Roger refuses and flees.

The next morning, Acme is discovered dead at his factory by the Los Angeles Police Department with a safe dropped on his head, and evidence points to Roger's being responsible. While investigating, Valiant meets Judge Doom, Toontown's superior court judge, who has created a substance capable of killing a toon: a toxic "dip" made of turpentine, acetone, and benzene. Valiant runs into Roger's toon co-star, Baby Herman, who believes Roger is innocent and that Acme's missing will, which will give the toons ownership of Toontown, may be the key to his murder. Valiant finds Roger, who begs him to help exonerate him, hiding in his office. Valiant reluctantly hides Roger in a local bar, where his ex-girlfriend, Dolores, works. Jessica approaches Valiant and says that Maroon forced her to pose for the photographs so he could blackmail Acme.

Doom and his toon weasel henchmen discover Roger, but he and Valiant escape with Benny, an anthropomorphic taxicab. They flee to a theater, where Valiant tells Roger that a toon killed Teddy when they were investigating a bank robbery by dropping a piano on his head. As they leave with Dolores, Valiant sees a newsreel detailing the sale of Maroon Cartoons to Cloverleaf, a mysterious corporation that bought the city's trolley network shortly before Acme's murder. Valiant goes to the studio to confront Maroon, leaving Roger to guard outside, but Jessica knocks Roger out and puts him in the trunk. Maroon tells Valiant that he blackmailed Acme into selling his company so he could sell the studio, but is killed before he can explain the consequences of the missing will. Valiant spots Jessica fleeing the scene, and assuming she is the culprit, follows her into Toontown. Jessica reveals that Doom killed Acme and Maroon and gave her his will for safekeeping, but she discovered that the will was blank. She and Valiant are captured by Doom and the weasels.

At the Acme factory, Doom reveals his plot to destroy Toontown with a machine loaded with dip to build a freeway, the only way past Toontown since Cloverleaf (which Doom owns) has bought out Los Angeles' Pacific Electric Railway. Roger unsuccessfully attempts to save Jessica, and the couple is tied onto a hook in front of the machine's hose. Valiant performs a comedic vaudeville act, causing the weasels to die of laughter; Valiant kicks their leader into the machine's dip vat, killing him. Valiant fights Doom, who is flattened by a steamroller, but survives, revealing him as a toon. Doom reveals that he killed Teddy. Valiant uses a toon mallet with a spring-loaded boxing glove and fires it at a switch that causes the machine to empty its dip onto Doom, dissolving him.

The empty machine crashes through the wall into Toontown, where it is destroyed by a train. Toons run in to regard Doom's remains, and Roger discovers that he inadvertently wrote his love letter for Jessica on Acme's will, which was written in invisible ink. Roger shocks Valiant with a joy buzzer, and Valiant gives him a kiss, having regained his sense of humor. Valiant happily enters Toontown with Dolores, and Roger with Jessica, followed by the other toons.

There were many characters of several different studios that appeared in Who Framed Roger Rabbit. As many have pointed out it's probably the only time Mickey Mouse and Bugs Bunny will be on screen at the same time. Among the many cameos were Mickey and Friends characters. 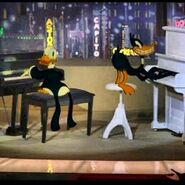 Retrieved from "https://mickey-and-friends.fandom.com/wiki/Who_Framed_Roger_Rabbit?oldid=33976"
Community content is available under CC-BY-SA unless otherwise noted.