The Prince and the Pauper is a Disney animated short film directed by George Scribner and starring Wayne Allwine as Mickey Mouse, inspired by the Mark Twain story of the same name. It was Disney's final use of the Xerox process, which the studio had used for three decades.

For many years, there was a good and wise king, who ruled with peace and compassion in every corner of town. The people of London prospered and were very happy. However, the good king fell ill, and his captain of the guards, Pete plundered and terrorized all of England, and worst of all, he did it in the name of the king. One day, Mickey Mouse, Goofy Goof, and Pluto, three beggars trying to get money for some food, dream of "living like a king", Captain Pete's carriage passes, having stolen much food from the people of London, and burying the three heroes in the snow. The hungry Pluto sees a sausage stand out from the carriage and begins to chase, pursuing it into the castle of the king. Mickey knocks on the door to get his dog back, and one of the soldiers opens the door and lets him in, mistaking him for the prince.

Pete scolds the soldier for letting anyone in, pointing out where the real prince is: taking his classes with his boring teacher, Horace Horsecollar. The teacher teaches the prince about trigonometry, while the latter looks out the window at the children playing in the snow. The prince, being discovered by his teacher, is mocked by his valet, Donald Duck. The prince plays at provoking Donald, while the teacher is distracted while writing on the blackboard, to the point that Donald inadvertently hits the teacher, resulting in the teacher sending Donald out of the room, returning both to their boring studies. But the Prince soon hears a commotion outside: it is Captain Pete, who is roughly handling Mickey and Pluto. The prince orders them to be brought to him right away. Pete kicks Mickey through the door, and kicks Pluto out of the castle.

Mickey, astonished to be in the king's palace, inadvertently knocks over many suits of armor, with one of the helmets falling on both his and the approaching Prince's heads. The two Mickeys are surprised to see that they are entirely alike in appearance. The prince tells the beggar that he is bored with his life: getting up early, studying all day, with every night parties and banquets and then going to bed early. So, when looking at the two in the mirror they realize that they can exchange a costume and take the role of the other, the prince reassures the beggar saying that to rule requires only two things: "What a splendid idea, good thing I thought of it!" and "Guards, seize him!", and if there are any problems, everyone will recognize the true prince with his real ring. The prince, disguised as a beggar, goes down the window, fooling the Captain Pete, who believes he is the beggar. Pete throws the "beggar" out with a catapult. The prince meets Mickey's friend Goofy and Pluto, but does not recognize them at all.

Meanwhile, Mickey is challenged with the prince's studies, such as chemistry, where the formula explodes in Donald's face, and falconry, where he is chased by the falcon. While the prince is trying to make a dog play with him by throwing a bone, all that does is make a group of dogs chase him in anger. After getting away, the prince sees a couple of soldiers trying to steal a chicken from Clarabelle Cow and her two children, saying it is for the king. But the prince in disguise orders them to return the chicken. The soldiers throw a pumpkin over him for a crown and leave, not believing he is the true prince. Children help him get up and explain that for years the soldiers take away their food and belongings in the name of the king. But a carriage, which carries food stolen from the village, goes by, and the prince stops it, showing the real ring. All bow to the Prince as he returns their food. But the soldiers, who had been called by the man driving the carriage, try to stop the prince, accusing him of fraud. The prince escapes with a little help from the other commoners, especially Goofy. Meanwhile in the castle, one of the soldiers tells Pete that one of the beggars had the royal ring. Pete is alarmed knowing then that the prince was cast out, and may see the corruption and theft going on outside. The soldier mocks Pete saying that he (Pete) is going to be punished dearly for it, but Pete answers that he won't if the prince never returns.

The beggar, dressed as the prince, is called by Horace Horsecollar and told that he must see his "father", who is now dying. Mickey enters the room of the dying king, but does not have the heart to tell him that he is not the real prince. Before his death, the king tells him he must take his royal birthright and become king. Mickey knows the true prince must be found as quickly as possible, but Captain Pete arrives behind him, and threatens Mickey to be crowned king at his orders, revealing that he had captured Mickey's dog Pluto as a hostage.

Meanwhile, the true prince hears the bells announcing the death of his beloved father. Knowing that he should be king, the Prince decides to return immediately to the palace. But Captain Pete captures the Prince and detains him with Donald, while the coronation begins. The beggar does not want to be king, but behind the curtain Pete is strangling Pluto. The prince orders the guard to let them leave, but he refuses to obey. Goofy disguises himself as an executioner, and after accidentally knocking out the guard, he tries to figure out which key opens the cell while the other soldiers arrive. Donald desperately finds the key for the cell, and the three flee to the coronation chamber.

The beggar, struggling not to be crowned, finally stops the archbishop, and has the guards arrest Pete, who in turn exposes the beggar as an impostor and demands he be arrested. Just then, the Prince arrives to fight Captain Pete, while many other soldiers are defeated by Goofy's clumsiness and Donald's cowardice. At the same time, the rope choking and restraining Pluto is cut, breaking the dog free. Seeing Captain Pete cornering the Prince and about to deliver him the coup de grace, Pluto rushes up and bites Pete in the rear, causing Pete to yell in pain. Gaining the upper hand, the Prince cuts Pete's trousers loose, revealing Pete's ruffled underpants. Pete attempts to escape from a large chandelier that has fallen and entangled some soldiers, but is tripped up by Mickey and the Prince, causing him to fall down. With his trousers down and his ruffled underwear fully displayed, Captain Pete becomes entangled with the soldiers in the fallen chandelier, which rolls out the window, leaving Pete and the soldiers to fall to their doom.

Mickey and the Prince then cheer because of their successful collaboration in defeating Captain Pete. The archbishop is confused and does not know who to crown, until Pluto recognizes the beggar, and the Prince shows his ring.

The Prince is crowned King of England, and with Mickey and Goofy at his side, rules for many years with justice and compassion for all. 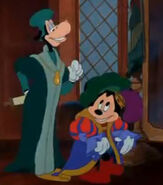 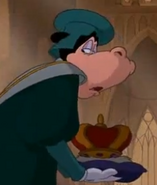 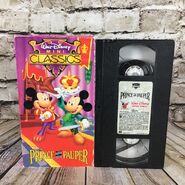 Mickey Mouse as Both, Prince and Pauper

Roy Dotrice as the Narrator

Retrieved from "https://mickey-and-friends.fandom.com/wiki/The_Prince_and_the_Pauper?oldid=32176"
Community content is available under CC-BY-SA unless otherwise noted.