Newton is a fan of his uncle's work, and wants to be an inventor like him when he grows up. Newton is also a Junior Woodchuck, as well as a friend of Huey, Dewey and Louie. In some comics, Newton is referred to as Giggy.

After the early 1970s, Newton ceased appearing in new North American Disney comics. He continued to be used in some Italian and Danish-produced Disney comics into the late 1990s.

There was a similar character in the DuckTales episode "Superdoo!", like Newton he was also in the Junior Woodchucks. Though his name is never spoken he does bear a physical resemblance to Newton Gearloose. 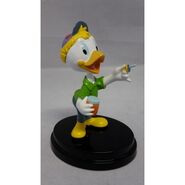 Add a photo to this gallery
Retrieved from "https://mickey-and-friends.fandom.com/wiki/Newton_Gearloose?oldid=20481"
Community content is available under CC-BY-SA unless otherwise noted.