The movie opens with Troubadour, a French-speaking turtle who loves songs, reminding a television-show narrator that he had promised Troubadour one of his songs would be used in the show that day. The narrator silently breaks his promise and walks away from Troubadour. He does not look where he is going and falls in a hole in the floor as the show is about to begin. Consequently, Troubadour is ushered in to tell the audience the story at the last minute, and he chooses his comic book of The Three Musketeers.

"Our story begins in the gutter", he says, where Mickey Mouse, Donald Duck, Goofy, and Mickey's dog Pluto are street urchins, who, while being robbed by masked bandits (played by the Beagle Boys) and are saved by the Royal Musketeers, Athos, Aramis, Porthos and D'Artagnan. Afterward, Athos gives his hat to Mickey as a souvenir. The urchins are inspired to be great musketeers some day. Years later, the three are working as janitors in the palace, still dreaming of becoming musketeers, despite their flaws: Donald is a "coward" (who turns into a chicken whenever he is frightened), Goofy is a "doofus", and Mickey is "just too small", according to Captain Pete of the Royal Musketeers. This leaves the three downhearted.

Meanwhile, Minnie Mouse, princess of France, and her lady-in-waiting, Daisy Duck, are in a palace discussing Minnie's obsession with finding her "one true love". Daisy says that she must marry someone who is of royal blood, and Minnie insists that she cannot marry someone she does not love. Minnie says she will know that he is "the one" when he makes her laugh. Minnie then takes a walk in the palace garden and barely escapes with her life when the Beagle Boys attempt to drop a safe on her.

The Beagles run to tell their boss, Captain Pete, that they were not successful in dropping the safe on Minnie. Pete gets upset, because the assignment was to kidnap the princess and keep her "safe" before the opera The Pirates of Penzance, which is when he plans to take over the kingdom. (This is accompanied by a running gag: whenever Pete mentions the opera, a poster of the opera is shown, and an excerpt of the chorus of "With cat-like tread", from that opera, can be heard.) Just then, Pete's lieutenant, Clarabelle Cow, tells Pete that Princess Minnie requests his presence. Pete goes to the princess, who tells him angrily that she wants musketeer bodyguards. Pete, knowing that skilled musketeers would jeopardize his kidnap plans, appoints Mickey, Donald, and Goofy to protect her, knowing that they will be easy to get rid of. He then went to the janitor room, telling Mickey, Donald and Goofy that they passed his test and have what it takes to become musketeers.

When the three "musketeers" meet Princess Minnie after strangling a suit of armor, she instantly falls in love with Mickey. The boys are so caught up wanting to make a good first impression that when Daisy comes in with a tray of cheese for Minnie and they see the accompanying knife, they tackle Daisy, mistakening her for a villain.

While Minnie and Daisy, protected by Mickey, Donald, and Goofy, go on a journey. They are ambushed by the Beagle Boys. Donald hides and is eventually thrown off the carriage, and Goofy is easily defeated, leaving Mickey to fight the intruders. Mickey is also defeated, leaving the three heroes stranded. Mickey encourages his friends not to lose hope and they rush to rescue Minnie and Daisy. At the entrance to a tall tower where they are unable to open the door, Goofy tells his fellow musketeers to stand back so he can break down the door, but Mickey sees a push sign on the door and opens it before he can stop, which sends Goofy rolling past the Beagle Boys and out of the tower. Outside, Goofy bounces off a tree, gets kicked by a cow and is thrown by a windmill back into the tower, and goes rolling past the Beagle Boys again. The trio catch up and fight the Beagle Boys (in which Donald runs off during the fight). When Mickey and Goofy are trapped with the Beagle Boys, Goofy sees his shape in the window behind them and gets the idea to do the same thing again with Mickey and they manage to knock the Beagles out of the tower and rescue Minnie and Daisy. After Mickey unties Minnie and makes her laugh, the two fall in love as they return to Paris.

Pete is furious that the Beagle Boys failed in their task and realizes that the three protagonists are more of a threat than he originally anticipated. He then plans to get rid of them one by one. While on night duty, Goofy is lured away from the palace by Clarabelle (who uses a shadow puppet of Mickey). The Beagle Boys appear before Donald, capture him, and Pete tries to do away with him, but he escapes and tells the whole story to Mickey (who doesn't believe him at first) before running off, leaving Mickey by himself. Mickey is then captured by Pete, who chains him up in a dungeon in Mont Saint-Michel that will flood when the tide comes in.

Meanwhile, Clarabelle is about to throw a chained up Goofy to his death off a bridge. Goofy flirts with her, and wins her heart with his "numbskull charm." She pulls him up and they kiss, but the bridge they're on breaks. The two plummet towards the river, but land on Donald's boat instead and survived. Goofy and Donald head for Mont Saint-Michel and he tries to convince Donald that they have to save Mickey but he is too scared to try after seeing a scary face (seen when the lighting strikes) on the mountain. A denigrating song by Troubadour, however, makes him change his mind and they rescue their friend just in time by pulling the chain holding him out of the wall. Outside the Paris Opéra, Minnie is captured by the Beagle Boys and the smallest one poses as her, announcing to the public that she is handing the crown over to a gleeful Pete. Mickey, Donald and Goofy arrive and battle Pete and the Beagle Boys onstage, finally defeating them and saving the Princess (though what became of the villains is unknown). Mickey and Minnie finally declare their love for one another, as do the others. Mickey, Donald and Goofy are dubbed royal musketeers.

In promotion of the original video release, Gemstone Publishing put out a 32-page comic book adaptation.

Mickey, Donald, Goofy: The Three Musketeers also served as a world in Kingdom Hearts 3D: Dream Drop Distance, making it the first production by Disneytoon Studios to be represented in the series. This world is known as the Country of the Musketeers. Mickey, Donald and Goofy (Musketeers outfit) was appears as the mobile game Disney Tsum Tsum. Mickey (Musketeer outfit) was appears as playable in Disney Cubes Play. 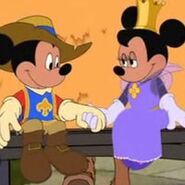 Add a photo to this gallery
Retrieved from "https://mickey-and-friends.fandom.com/wiki/Mickey,_Donald,_Goofy:_The_Three_Musketeers?oldid=30575"
Community content is available under CC-BY-SA unless otherwise noted.