Huey, Dewey, and Louie wake up one Christmas morning and open their presents, even though they are supposed to wait first for Aunt Daisy, Uncle Scrooge and Aunt Gertie to arrive. After the boys take their new sleds from their Uncle Donald (not reading the included gift card) they go sledding and have Christmas dinner. While Donald, Daisy, Uncle Scrooge, and Aunt Gertie sing carols, the boys play with their new toys. Later, it is time for the boys to go to bed and having enjoyed the day immensely, the boys then wish that it would be Christmas every day. Their wish is granted and at first the three are joyful. After a few days, however, they begin to get sick of Christmas and soon realize that every day will be exactly the same as the day when they first made their wish. They then decide to change the course of action of the next day by playing tricks and pranks, including swapping the cooked turkey with a live one for the dinner table. The day turns out to be a bad Christmas for everyone, especially Donald. After this, the boys finally read the gift card that was given to them which they had previously disregarded. The card is from Donald and Daisy, it wishes them love and explains that Christmas is not just about presents, it is about being with family. The boys instantly become guilty for their pranks and decide to make amends by making the next day the best Christmas ever. At the end of the next day, the boys finally realize the true meaning of Christmas and the time loop comes to an end, leading into the day after Christmas.

Goofy and Max are mailing out a letter to Santa Claus. However, as soon as they get home, Pete, the neighbor, tells Max that Santa does not exist, predicting how he can't fly around the world in one night. Things get worse when Goofy poses as Santa for some kids and Max finds out that he tricked him. Goofy is determined to prove to Max that Santa does exist and even stays up all Christmas Eve to keep an eye out for him. But after falling off the roof, Goofy gives up hope of Santa coming. Now, Max does everything that Goofy did to make his father happy, including posing as Santa. In the end, the real Santa actually comes and gives Max the gift the boy asked for earlier (as well as blows some snow on Pete's house when the cunning neighbor tries to flatter the legendary figure). This segment of Mickey's Once Upon a Christmas chronologically precedes the cartoon series, Goof Troop.

Mickey & Minnie's Gift of the Magi

Based on the story by O. Henry. Mickey wants to get Minnie a gold chain for her one heirloom, her watch, so he works at Crazy Pete's Tree Lot. Minnie wants to give Mickey something special for Christmas as well, so she works hard to get her special bonus. However, Pete (Mickey's uptight and greedy boss) angrily steals Mickey's money and fires him when he ruins his chance of selling an expensive 10-footer to a poor family. When Pete puts money in his back pocket, he didn't know he has smoked cigar in his hand by mistake, burning his butt, and setting 10-foot trees on fire, much to his dismay. Minnie's bonus proves to be nothing but a fruit cake. After playing music for a toy drive with the Firehouse Five, Mickey has the idea that he can trade his harmonica for the chain. Back at Minnie's house, Mickey gives her the chain for her watch and Minnie gives him a case for his harmonica. Of course, the irony is that Minnie no longer has her watch—just as Mickey no longer has his harmonica—so the gifts are essentially useless. As in the classic Gift of the Magi upon which this adaptation—penned by Richard Cray—is based, the thought behind each gift is what counts. 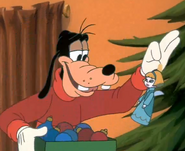 Retrieved from "https://mickey-and-friends.fandom.com/wiki/Mickey%27s_Once_Upon_A_Christmas?oldid=34180"
Community content is available under CC-BY-SA unless otherwise noted.