Mickey's Christmas Carol is a 1983 American animated fantasy short film produced by Walt Disney Pictures and released by Buena Vista Distribution. It was directed and produced by Burny Mattinson. The cartoon is an adaptation of Charles Dickens' A Christmas Carol, starring Scrooge McDuck as Ebenezer Scrooge. Many other Disney characters, primarily from the Mickey Mouse universe, Robin Hood, and The Adventures of Ichabod and Mr. Toad, were cast throughout the film.

Mickey's Christmas Carol was largely an animated adaptation of a Disneyland Records 1974 audio musical entitled An Adaptation of Dickens' Christmas Carol. The musical featured similar dialogue and cast of characters with the exception of the first and last Christmas ghosts.

This was the first original Mickey Mouse theatrical cartoon produced in over 30 years. With the exception of re-releases, Mickey had not appeared in movie theaters since the short film The Simple Things (1953). Many additional characters seen in the film had also not appeared in a theatrical cartoon for several decades. The film was also the last time in which Clarence Nash voiced Donald Duck. Nash was the only original voice actor in the film as Walt Disney (Mickey Mouse) and Pinto Colvig (Goofy) had died in the 1960s, Cliff Edwards (Jiminy Cricket) and Billy Gilbert (Willie the Giant) in 1971, and Billy Bletcher (Pete and the Big Bad Wolf) in 1979.

On Christmas Eve 1843, while all of Victorian England is in the merry spirit of Christmas, Ebenezer Scrooge (Scrooge McDuck) thinks only of the money he has made and of making more (apparently, he charges people 80% interest, compounded daily). While Scrooge's selfish thoughts cascade in his head, Bob Cratchit (Mickey Mouse), exhausted and underpaid (a meager two shillings and a ha′penny per day), continues to work long and hard for him. Cratchit hesitantly asks for a "half day off" for Christmas, to which Scrooge gives in but replies it will be unpaid. When collectors Rat and Mole, along with beggars on the streets, kindly ask for a simple donation, Scrooge responds to Rat and Mole that if he does, the poor will no longer be poor and thus they (the collectors) will be out of work, "and you [can't] ask me to do that, not on Christmas Eve." Scrooge's cheery nephew Fred (Donald Duck) invites his crotchety uncle to a holiday feast fit for a Roman emperor—roast goose with chestnut dressing, candied fruits, and cinnamon cake with lemon glaze. Scrooge turns him down flat, stating that such rich festive cuisine gives him digestive and other health difficulties.

Later, Scrooge is visited by the ghost of Jacob Marley (Goofy Goof), Scrooge's greedy former business partner who had died seven years earlier. Due to his cruelty in life, he is doomed to wear heavy chains for eternity. He warns that a similar fate will befall Scrooge unless he changes his ways and that Scrooge will be visited by three spirits. Marley then leaves, falling down the stairs when he tries to avoid tripping over Scrooge's cane again (complete with the "Goofy holler").

At the stroke of 1:00, the first spirit, the Ghost of Christmas Past (Jiminy Cricket), shows Scrooge his past. His obsession of money led him to break the heart of his fiancee Isabelle (Daisy Duck) by foreclosing on the honeymoon cottage's mortgage (Isabelle's last payment on it was an hour late.).

At the stroke of 2:00, the second spirit, the Ghost of Christmas Present (Willie the Giant), arrives and shows Scrooge the poverty-stricken Cratchit family, who still keep a festive attitude in their home despite their hardships. Bob's young son, Tiny Tim, is revealed to be ill, and Willie foretells tragedy if the family's hapless life does not change. However, just when Scrooge is desperate to know Tim's fate, the Ghost of Christmas Present disappears, and the house goes into complete darkness.

And finally, the third and final spirit, the Ghost of Christmas Yet to Come (a hooded figure later revealed to be Black Pete), takes Scrooge to the future in a graveyard. When he sees Bob mourning Tiny Tim's death, Scrooge is horrified and asks whether this future can be changed.

Two gravediggers (Weasels from The Adventures of Ichabod and Mr. Toad) are amused that no one attended someone's funeral while digging a grave. After the weasels leave to take a break from their work, the ghost reveals the grave to be Scrooge's by lighting a match. The ghost shoves him into his grave calling him "the richest man in the cemetery." Despite his pleas that he will repent, Scrooge falls into an empty coffin which bursts open to Hell.

However, Scrooge suddenly awakens on Christmas Day—it was all just a dream. Having been given another chance, he throws his coat over his nightshirt, puts on his slippers, dons his cane and top hat, and goes to visit the Cratchits, cheerfully donating generous amounts of money along the way (including 100 gold sovereigns to Rat and Mole; the charity collectors from earlier) and telling Fred that he will come after all. He tries to play a joke on Bob, dragging in a large sack supposedly filled with laundry and announcing gruffly that there will be extra work in the future. But to the Cratchits' joy, the sack is instead filled with toys and a big turkey for dinner. Scrooge gives Bob a raise and makes him his partner in the counting house, and Tiny Tim proclaims "God bless us, everyone!" 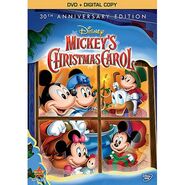 Retrieved from "https://mickey-and-friends.fandom.com/wiki/Mickey%27s_Christmas_Carol?oldid=33632"
Community content is available under CC-BY-SA unless otherwise noted.