He is the park ranger of Brownstone National Park (a play on Yellowstone National Park), one of the features of which is a geyser named "Old Fateful" (a play on Old Faithful). He was originally voiced by Bill Thompson. Woodlore's name is an inside joke-reference to John James Audubon, the famous 19th Century ornithologist/naturalist/painter. He is currently voiced by Corey Burton and Jeff Bennett.

He first appeared in two 1954 Donald Duck cartoons Grin and Bear It and Grand Canyonscope. (It is revealed in the latter that Woodlore was a postal worker prior to his Ranger days.) One year later, in Beezy Bear, he repeatedly admonishes Humphrey the Bear "You bathe too much!", not realising that the bear is really just hiding in the pond from the bees whose honey he was trying to steal.

Woodlore prides himself on running a tight ship and is frequently oblivious to those (particularly Donald) who are humiliated and/or insulted by his constant scoldings and criticisms. Despite his somewhat authoritarian attitude, he cares about the bears as if they were his children...although he once bamboozled them into cleaning up the park for him (so that he could nap in a hammock) by singing the jazzy ditty "In the Bag". When Woodlore's lazy motive became apparent, the bears irritably bagged him along with the litter. Most of the bears are respectful of Woodlore, except Humphrey the Bear, whom the Ranger often lectures.

The Ranger also made an appearance in "Down and Out With Donald Duck" (also known as "A Duckumentary"), a mockumentary about Donald Duck's infamous temper, where he is out of uniform, now working in an employment agency where Donald seeks a job. Woodlore's name appeared on the entrance sign at Disneyland's Bear Country land, as the resident park ranger.Woodlore most recently appeared in an episode of Disney's House of Mouse. 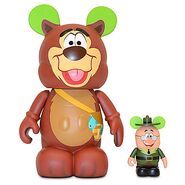 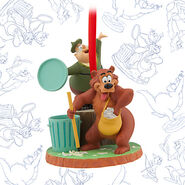 Retrieved from "https://mickey-and-friends.fandom.com/wiki/J._Audubon_Woodlore?oldid=34059"
Community content is available under CC-BY-SA unless otherwise noted.