Gram-Gram Peg-Leg is Pete's grandmother, and one of the few honest members of his family. She always wanted Pete to go into the entertainment business, rather than become a crook. According to her grandson, she used to sing "Boom-Da-Boom" to him when he was little.

She made her animated debut in the House of Mouse episode "Pete's One-Man Show", where she was voiced by Jim Cummings. At the end of the episode Pete brings her into the House of Mouse to be his audience during his one-man show, after the rest of the club's guests have left. 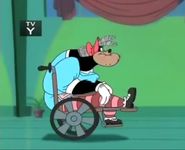 Add a photo to this gallery
Retrieved from "https://mickey-and-friends.fandom.com/wiki/Gram-Gram_Peg-Leg?oldid=34184"
Community content is available under CC-BY-SA unless otherwise noted.