Gloria is Fethry Duck's girlfriend. She would sometimes like Fethry to be less lazy and more romantic. Just like Fethry fights crime as the Red Bat, Gloria has her own superhero identity as the Purple Butterfly.

Back in the early 1970s, when the hippie movement was all the rage, Fethry was given a flower power girlfriend, complete with bell bottom trousers, bandana, giant sunglasses and the generally unkempt and garish appearance of the hippies. She first appeared in the story Paz, Amor E Glória in Zé Carioca #1099 from 1972, created by Ivan Saidenberg and possibly the artist Sérgio Lima, and she was one of a number of characters created for the Brazilian market.

By her second appearance she got her present looks. Her beak was straightened out, her hair was changed from white to blond, her trousers removed, and the sunglasses changed to ordinary glasses. She still kept her hippie appearance, only it was toned down.

One of the characteristics of the character which was established by her third appearance was her infatuation with Morcego Vermelho, Fethry's Brazilian super-hero alter ego. At first this meant stories about Fethry's rival for Gloria's affection was himself (a common theme in the Superman stories at the time). Later, in 1983, Gérson L. B. Teixeira and Luiz Podavin made her into the super-heroin Borboleta Purpura (The Purple Butterfly) who would be Morcego Vermelho's partner in crime fighting.

There are presently no records of her being transferred to other media, but it is highly likely she has has appeared as merchandise. 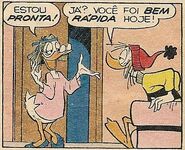 Add a photo to this gallery
Retrieved from "https://mickey-and-friends.fandom.com/wiki/Gloria?oldid=23711"
Community content is available under CC-BY-SA unless otherwise noted.