Felicity Fieldmouse or simply Mrs. Fieldmouse, is an anthropomorphic mouse who is Mickey Mouse's older sister and Morty and Ferdie's mother.

As of yet, she has not made any appearances in animation.

She first appeared in Morty and Ferdie's 1932 debut strip, Mickey's Nephews, as a mouse lady arriving at Mickey’s house and drops the twins off, asking if Mickey would not mind caring for them while she's running an errand. However, in this version she was not Mickey's sister, as he referred to her as as "Mrs. Fieldmouse"; as drawn, she looks more like an elderly relative. However, the relationship was changed to siblinghood when the character was re-booted for more recent comics. The fact that Mickey is Morty and Ferdie's maternal uncle was also indirectly confirmed by the fact that, in the 1935 Mickey Mouse one-pager He's a Knockout, Mickey states that he does not have a brother.

At Egmont Publishing, she was given her current name Felicity Fieldmouse. As a side note, Egmont also named Felicity's husband—the twins' father—Frank, though he has yet to be specifically named or depicted in a published comic. Egmont's modern version of Felicity has slimmed down and is designed to look closer to Mickey in age, while remaining significantly taller than him. 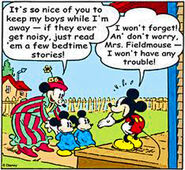 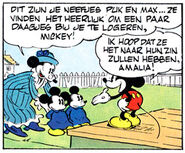 An alternative version with slightly different colors
Add a photo to this gallery
Retrieved from "https://mickey-and-friends.fandom.com/wiki/Felicity_Fieldmouse?oldid=24088"
Community content is available under CC-BY-SA unless otherwise noted.