Emil Eagle is a an anthropomorphic eagle who first appeared in Donald Duck #102, as a rival inventor for Duckburg's iconic inventor Gyro Gearloose. Later on, he was adopted into the Mickey Mouse comic books as well, as an enemy for Mickey Mouse and his friends, in particular Super Goof.

Emil has caused a lot of trouble for Mickey Mouse, Super Goof, Donald Duck, Scrooge McDuck, Gyro Gearloose, and other characters on various occasions. Sometimes he has teamed up with Pete, the Beagle Boys, Mad Madam Mim, or other bad guys from the Disney comic character cast. 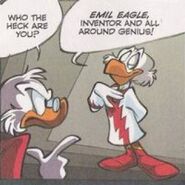 Add a photo to this gallery
Retrieved from "https://mickey-and-friends.fandom.com/wiki/Emil_Eagle?oldid=34043"
Community content is available under CC-BY-SA unless otherwise noted.