He is a friend of Huey, Dewey, and Louie, and Launchpad's sidekick. Generally speaking, Doofus is a rather dim-witted and clumsy character, with a positive attitude as insatiable as his appetite. He exhibits hero worship for Launchpad, which frequently borders on the delusional. (The relationship between Doofus and Launchpad in many ways mirrors that of Launchpad and Scrooge.) Doofus is also marked by his strong moral compass, best demonstrated in the episode "Superdoo!", in which he uses newly acquired superpowers to save the Junior Woodchucks from catastrophe only to voluntarily relinquish them for the sake of hard work and friendship.

Doofus also appears in the DuckTales reboot. He is a very different character in that incarnation, and is show to be a spoiled rich boy and antagonist. 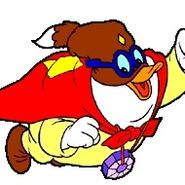 Add a photo to this gallery
Retrieved from "https://mickey-and-friends.fandom.com/wiki/Doofus_Drake?oldid=30829"
Community content is available under CC-BY-SA unless otherwise noted.