Start a Wiki
Disney Magical World 2 (Often reffered to as Disney Magical World 2 by North American Fans)is an upcoming 3DS game and the sequal to Disney Magic Castle: My Happy Life (titled Disney Magical World in the North American Release) set to be released on November 5, 2015. The popular life simulation game returns with new features, new costumes, new worlds, and even more new characters. There is currently no news about a North American release. The theme song for the game is "Sparkle ~Kagayaki wo Shinjite~" by May J. Disney Magical World 2, the follow up to the popular franchise, lets players enjoy a variety of new adventures in six Disney-themed worlds, such as exploring the world of Disney Frozen, dancing with Disney princesses or soaring through special Magical Dream events. Players will encounter and interact with well-known characters like Mickey Mouse, Minnie Mouse, Goofy, Elsa, Anna, Olaf, Ariel, Donald Duck and Daisy Duck. The game launches Oct. 14.

Bandai Namco Entertainment officially announce the title on June 19th, 2015 by opening a official website. A live stream was hosted on July 6th with additional information being revealed. During the live stream it was announce that the game will ship in Japan on November 5th. A new 3DS bundle was also announced. The bundle will contain the game itself and a specially designed 3DS featuring Micky Mouse. The game will cost around 5,690 yen while the 3DS bundle will cost 21,690 yen.

Disney Magical World 2, similar to it's presecessor, is a life simulation video game. Players will get to customize their own avatar, design their own cafe, interact with several Disney Characters, complete several quests, collect items, create clothes and decor for their avatar and cafe, go fishing, and visit Disney themed worlds. The new game is also set to debut brand new settings and worlds such as Frozen and The LIttle Mermaid. Some familar worlds such as Alice in Wonderland and Winnie the Pooh will return with new designs and features.

A new feature to the game is the "Dance Show" feature. Little is known at the moment but judging by the promo video released on July 5th, Players will get to participate in a dance show with several other Disney characters.

Another new feature being added to the game is the "Dream Fantasy" which will be activated when the player falls asleep. Currently little is known about this new feature. 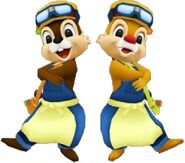 Scrooge McDuck
Add a photo to this gallery

Scrooge McDuck
Add a photo to this gallery

Retrieved from "https://mickey-and-friends.fandom.com/wiki/Disney_Magical_World_2?oldid=22631"
Community content is available under CC-BY-SA unless otherwise noted.