Disney Magical World (Originally titled Disney Magic Castle: My Happy Life) is a life simulation game released in Japan on August 1st, 2013. The game was later released in North America on April 11, 2014 and Europe on October 24, 2014

Gameplay in Disney Magical World is very simple. To move your character you only need to use the direction pad. Picking things can be done via a cursor that appears on screen or by stylus. Other important buttons include:

When fishing the player only needs to choose where to put their fishing lure, then wait for a bite, Whenever that happens a mark on screen will appear. The player will only need to push the A button whenever it appears in order to catch a fish. The fish will release a item for the player before being released back into the water by the player.

Dungeons is a place for players to defeat enemies, collect items, and complete quests. Dungeons are themed to the world they are in and contain items exclusive to said dungeon. Each dungeon has a specific mission and a difficulty star system. The more stars, the harder the dungeon (the maximum amount of stars is 5.) Users get to keep almost every single item they collect in the dungeon (except for key guest items) In the dungeon the controls remain about the same. However, there is an addition of shooting powerful balls of energy at the target using the A and Y buttons, and also a powerup item when needs to be tapped on the lower screen which allows the user to use special magic attack unlimited for a short period of time. Also enemies will be temporarily distracted. This can be done by defeating a Present monster. At the end of a dungeon, a boss (usually a bigger and tougher version of a common enemy) will be present. Once they are defeated, they will usually open the exit to the dungeon and a chest that is opened with red crystals collected in the dungeons. These crystals can be used as healing items as well but the more items crystals keep, the more prizes the player will get at the end of the dungeon when they unlock the chest. Also mini-bosses (usually covered in shadows) are in some dungeons. Once they are defeated, they will unlock an exclusive chest. Larger bosses are extremely tougher and are available in the later dungeons. In order to progress smoothly, the user will collect recipes to create quest clothing that will increase their health and recipes to collect new wands that increase their magic power. 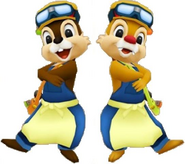 Huey Dewey and Louie
Add a photo to this gallery

Pete
Add a photo to this gallery

Retrieved from "https://mickey-and-friends.fandom.com/wiki/Disney_Magical_World?oldid=22578"
Community content is available under CC-BY-SA unless otherwise noted.