Arizona Goof (or Indiana Pipps he was called originally in Italy), is the cousin of Goofy Goof.

Arizona is an archaeologist and explorer. He has a rare habit of not using beds, doors, or stairs. Instead, he sleeps in a tent, enters and exits houses through windows and climbs floors by a rope. Arizona is fond of a specific brand of liquorice candy (the brand is called Negritas in original Italian language version, Tuju in the Finnish language translation), which he never travels without and is addicted to the taste of, but which everyone else finds horrible. Arizona's car is an old jeep which he has named affectionately as Gippippa (Jeep + Pippo, Goofy's Italian name). Arizona has a rival archaeologist, Dr. Kranz, who is greedy and shameless and not above resorting to criminal behaviour. Arizona and Goofy look almost identical, which has been used as a plot device, when Goofy has masqueraded as Arizona to fool Dr. Kranz. For the readers' benefit, there is one small difference: Arizona has hairs dangling from his floppy ears, whereas Goofy's floppy ears are smooth.

Arizona Goof received his English name in his first American comics appearance (1991). In a couple of 2005-2006 appearances, the character was inexplicably renamed "Arizona Dipp". But more recent uses (Disney Digicomics, 2009–2010) have restored his traditional English name.

The character Arizona Goof was created by writer Bruno Sarda and artist Massimo De Vita in 1988,[disputed – discuss] as a spoof of the film character Indiana Jones. 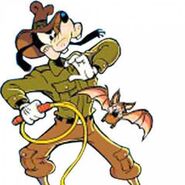 Add a photo to this gallery
Retrieved from "https://mickey-and-friends.fandom.com/wiki/Arizona_Goof?oldid=15824"
Community content is available under CC-BY-SA unless otherwise noted.